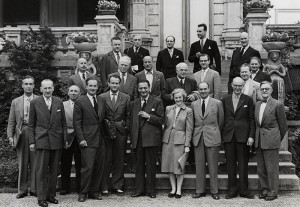 There are among our members few who experienced the immediate aftermath of the war which ended in 1945. In Europe it had been a war that dominated everyone’s lives for more than five years, and the war itself had been preceded by a decade of financial depression and increasing political and military animosity. Violin and bow makers, and the trade in general, had endured fifteen years in which it was difficult to earn any sort of living, and for some, at times, impossible. Artistic creativity was for the most part just an occasional dream.

The ending of the war saw old friendships and contacts renewed across national boundaries, even though there was at first little business to be done. In October 1947 a number of experts from different countries met in Paris to examine the possibility of organising a Stradivari exhibition in Cremona, and although nothing ever came of that project, the seed of what was to become the Entente was sown when the idea of creating an international group of craftsmen came under discussion.

It was during the International Exhibition of Contemporary Violin Making at The Hague in 1949 that Max Möller Jr formally proposed the setting up of an international society, along the lines of the national groups which already existed in France, Germany and Switzerland, and to some extent in Holland and Italy. Charles Enel, Vice-President of the French Group, invited his foreign colleagues to come to Paris for a further discussion at the annual Sainte-Cécile celebration.

Good progress was made, and Henry Werro and Pierre Vidoudez, respectively President and Vice-President of the Swiss Group, proposed a general meeting in Geneva in August 1950 for study of the committee’s proposals and approval of those considered suitable. This meeting too was successful, under the presidency first of Emile Français, then of Charles Enel, William Beare having resigned the position for personal reasons. A set of statutes was proposed by the French colleagues who attended, and there was animated discussion. It was agreed that those present at the meeting, together with others who had expressed support but were not able to come to Geneva, should be nominated as founder-members. It was further agreed that there should be a meeting of the founder-members in Paris on November 25th and 26th 1950, and it was there, under the presidency of Emile Français, that the statutes were agreed in principle. The Entente was born!

After further consideration and legal enquiries the statutes of the Entente were finally ratified at a meeting in Mittenwald on July 28th-30th 1951, and it was there that the provisional committee was replaced by one composed of a single representative from each participating country. This new Committee, identical to the Entente’s Committee today, though of course much smaller, had the power to appoint the Bureau, consisting of the President, the Vice-President (each also representing his own country) and, as independent officers without a vote, the Secretary and Treasurer. It was decided to meet once a year, in London in 1952, and Milan in 1953.

The main initial purposes of the Entente were set out as to sustain the ties of friendship between its members, to be ready if necessary to protect the working environment, to improve the methods of training pupils, to maintain the highest possible standard of lutherie, and to make the art known as widely as possible, given the danger of its being suffocated by the modern industrial world.

In Milan in the hot summer of 1953 the presidency passed from Emile Français to Desmond Hill, while Max Möller took over as Secretary from Georges Dupuy, who had done a fine job dealing with all the necessary correspondence, diffusion of information and keeping of records.

In 1954 the Congress was in Copenhagen, and in 1955 in Amsterdam, It was there that Desmond Hill proposed that Congresses should be every two years, so Amsterdam was followed by Paris in both 1957 and 1959. In 1957 Andrea Bisiach became President, retaining that office until the 1961 Congress in London. There it was proposed, again by Desmond Hill, that a new President should be elected every two years, and that the following Congress should normally be in his own country. This wise proposal was adopted, and has meant not only a sharing of the considerable work-load, and efficient organisation of the Congresses, but also a regular supply of fresh ideas and varying styles at the head of the Entente.

It may be noted that throughout the 1950’s membership of the Entente remained exclusively European. So, at the time, were the difficulties which its members had to face, principally the assaults on established tradition by Giovanni Iviglia and the Swiss ‘Expertenkammer’. It was a period when instruments made by the great old makers were routinely and pseudo-scientifically denounced as fakes, to the confusion of their owners and the despair of those who knew the truth.

Although some of its leading members were portrayed as perpetuators of a long-established conspiracy to defraud the musical public, the Entente was not conceived to be a pressure-group in questions of expertise, and never became one.

By the early 1960’s the Swiss crisis – for such it certainly was at times – had largely melted away. The Congresses of Amsterdam (1963), Stuttgart (1965), Angers (1967) and Copenhagen (1969) were by all accounts pleasant social occasions as well as meeting-points for professional ideas. The programme for Amsterdam shows an evening meeting of the Committee on Sunday June 30th, with departure scheduled for the following Friday, July 5th. On the Monday and Tuesday there were half-day business meetings, and on the Wednesday a visit to the musical instrument collection of the Municipal Museum at The Hague. There-apart one has the impression of a relaxed and gastronomically satisfying séjour, largely down to the generosity of the Dutch members, in particular Max Möller and Johann Stüber. The other Congresses of the 1960’s were equally marked by the warm hospitality that has been a tradition ever since.

At the 1969 Congress in Copenhagen Etienne Vatelot proposed that in non-congress years the members should meet for what became known as ‘Working Days’, days of study in which the work of a particular maker or school would be examined in detail. Each member would in theory bring one or more relevant instruments for comparison and discussion. These meetings have been a significant success for the Entente over the years. At the first meeting in Paris in 1970 the Florentine School was the subject for study, and it has to be noted that some of the instruments brought were less than Florentine. Gradually the Working Days have come more and more to resemble the Congresses, with similar organisational responsibilities for the host cities. In consequence, however, the time spent on professional and educational activities has doubled, for the benefit of the entire membership.

In 1971 the Congress took place in Geneva, under the presidency of Pierre Vidoudez. International membership was growing fast. 1973 found the members in Harrogate, England, with William Beare as President and with pouring rain throughout. 1975 saw the first American Congress, hosted by William Moennig Jr in Philadelphia and Ocean City. 1977 was the turn of Max Möller once more, a splendid boat-ride on the Ysselmeer contrasting with an animated discussion about restoration techniques, and the Congresses of the 70’s ended in Mittenwald in 1979 under President Walter Hamma.

In 1981 Etienne Vatelot chose Cannes as the venue, and in perfect weather the famous Hotel Carlton and its private beach were enjoyed by all. It was at Cannes that we had our first experience of simultaneous translation – previously all the hard work had been done by the multi-lingual Pierre Vidoudez, who was delighted to rest his voice. President Gerhard Neubauer hosted the 1983 Congress in Vienna, the highlight in retrospect a mediaeval banquet at which all members and partners wore ‘authentic’ clothing. Warm-hearted Sesto Rocchi was the President in 1985 for a less eventful meeting at Cremona, and in 1987, with Andrew Hill as President, an interesting and enjoyable time was had in London.

Membership of the Entente had increased rapid¬ly, and there were some who wondered if the rules for admission should yet again be changed. By 1985 the Entente was 35 years old, with many founder-members already retired or expired. A small committee was formed, of Roland Baumgartner, Charles Beare and Berend Möller to consider the future of the Entente, and what its aims should be, as well as the membership question. Should there be a limit to the numbers, should membership be by invitation rather than application, if by application what should be the grounds for refusal – these and many other questions were discussed. The main conclusion was that the Entente should be mainly social and educational, a meeting place for the making and sharing of friendships as well as for the exchange of professional ideas. Therefore, only those applicants with plenty to contribute in those areas should so far as possible be admitted, subject still to the strict professional qualifications that had, with minor adjustments, always been required. The discussion of the committee’s ideas reflected a certain amount of resentment of members whose sole contribution appeared to be use of the Entente’s name on their writing paper.

In 1989 President Hans Weisshaar brought the Congress to Washington D.C., a refreshing meeting from every point of view, though overshadowed soon afterwards by the tragedy of Berend Möller’s murder. The 1990’s too have seen a fine series of Congresses and Working Days, the Congresses hosted by Presidents Mads Hjorth (Copenhagen, 1991), Roland Baumgartner (Basel, 1993), Serge Stam, (Utrecht, 1995), Wolfgang Bünnagel (Köln, 1997), and Charles Beare (Dublin, 1999). During this last period the group of bow makers within the Entente has come to organise its own study-subjects and lectures, which have been of equal interest to those more occupied with instruments. We have also seen the admission of a number of “Associate Members”, from among those in our profession who have chosen to work for other members rather than to establish their own businesses. In addition, we have begun to discuss the idea of broadening our membership still further by inviting outsiders who have made a special contribution to the métier to become “Honorary Members”.

So it is that we can, in the year 2000, look back with some pride at what the Entente has become in its 50 years, and with gratitude for the vision of the founder-members, who took positive steps in difficult times. Our senior members also look back with nostalgia, remembering the friendships made at the early Congresses. At the same time we can all look forward with optimism to the years ahead of us, and to the furthering of knowledge and quality in the profession to which our members are dedicated.